Nävgröt(Motti) from Värmland – Swedish Regional Dish of the Month 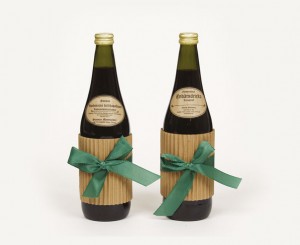 Nävgröt  – A very traditional dish in Värmland in the west of Sweden.  Nävgröt also called Motti or Mutti , with origin of the area of the Finnish settlers, who came to Värmland and Dalarna during the 16th  century.

Additionally, Torsby, Värmland have a  “Nävgröts Academy” to honour this regional dish!

Made of Skrädmjöl, a special flour made from oaths and often accompanied with thick cut Bacon and Lingonberry Jam. Goes well together with a glass of  Enbärssdricka (Juniper juice).

Fried or dip it in lard and you get plenty of energy!

Boil water and salt. Pour in the skrädmjölet(the oat flour) at once.
Do not stir but stamp with a wooden spoon.
When all the water has boiled up so is the Nävgröten ready.
Stir in the bottom of the sauce pan towards the end. Serve immediately with fried salt thick-bacon and lingonberry jam.
Should it be in The Värmland way, so drink a small beer or  a glass of Juniper juice.