Jenny Nyström – The mother of “Tomten” and the Swedish Christmas Card

Jenny Eugenia Nyström (born June 13 or June 15, 1854 in Kalmar, Sweden; died January 17, 1946 in Stockholm) was a painter and illustrator who is mainly known as the person who created the Swedish image of the jultomte on numerous Christmas cards and magazine covers, thus linking the Swedish version of Santa Claus to the gnomes of Scandinavian folklore. 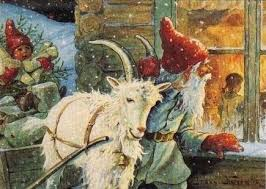